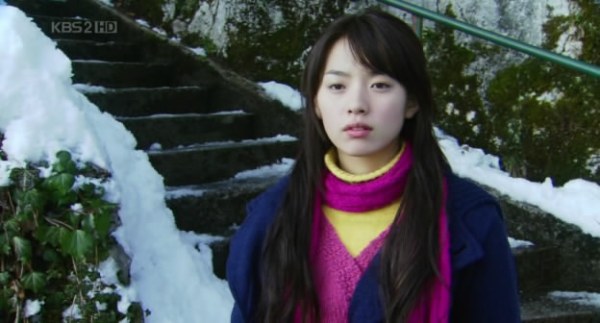 Spring Waltz is beautifully shot, carefully arranged, filmed in stunning locations around the world and set to hauntingly lovely classical and indie music(Loveholic’s “One Love” is the main theme). It is so sophisticated and restrained, in fact, that I am sick to death of it. Spring Waltz is so consumed with how it looks and feels that it forgets about the part where it’s supposed to draw viewers into the plot and lives of the characters portrayed.

You get the feeling that Yoon Suk-Ho, the drama PD, was so focused on the surface aspects of this film, on painstakingly creating a beautiful look and sound – which he succeeds at so well(filming locations include picturesque, snow-drenched Salzburg and Hallstat in Austria) – that he forgot to put emotional heat and heart into the film, with the result that it feels like a still canvas, a painting – beautiful to look at, but not alive. His characters seem almost like puppets, wandering on and off screen without any clear idea where they are or why they’re here. There’s a deep sense of disorientation in the drama’s first few episodes, springing partially from the fact that all the characters are in Austria, a place not native to them – but instead of being a symbolic echo of the characters’ sense of dislocation, as other works such as Lost in Translation have done succesfully, the disorientation feels at once overt and unintentional. It’s as if, in trying to tell us that his characters are lonely and emotionally locked away, Yoon Suk-Ho instead makes us also feel the chill of that winter, so that instead of feeling sympathy or empathy with his characters we just get gradually depressed. Such at least was my impression after watching the first 5 episodes.

And who could blame him? you say. Yoon Suk-Ho, who almost single-handedly launched the Korean wave with Winter Sonata and Autumn Fairy Tale, famed drama PD, of immeasurable renown…and that I think is exactly the problem. He got complacent – became so fixated on bringing out certain facets and aspects of this fourth drama in his Seasons quartet – especially the theme of winter versus spring – that it was some time before he got around to realizing that he should be bringing his characters, not just their setting, to life. If I could meet him, I would tell him in one sentence what he needs to do: Stop being so clever and get on with the story.  It doesn’t help that all the actors, with the exception of Daniel Henney(and don’t even get me started on his acting ability/screen presence) are relative newbies and clearly didn’t quite know what they were doing(I’m watching Han Hyo-Joo in the currently-airing Brilliant Legacy as well and I assure you, the difference is incredible, and lies not just in the difference in her roles – she grew a lot as an actress). It’s not that any of the actors are terrible – in fact Han Hyo-Joo seems just fine so far -but Seo Do-Young as lead Jae Ha/Su Ho possesses all the expressionless reserve and icy calm of the traditional emotionally cut-off hero(who will be opened up by heroine) without any of the saving graces of charisma or extreme good looks(he’s pretty, but in an extremely boyish way, and not exceptionally so). While Daniel Henney…well, I said I wouldn’t talk about him, so I won’t. Let me just say that I personally find him annoying as both an actor and a character, and I cringe whenever he comes onscreen.

However, I think I’ve talked myself into sounding like I dislike Spring Waltz more than I do. I don’t hate Spring Waltz. I don’t even really dislike it so far. It’s more that I’m disappointed in it – I am disappointed in its pace, its lack of forward plot movement and chemistry and fire between the leads. But Spring Waltz isn’t all bad – I really really like the set-up: an icy genius pianist who finds his childhood love again and falls for her outgoing, warm personality – and I’m interested enough in all the great possibilites of that set-up, as well as a few hints of future things the drama has dropped – to keep going, even after 5 episodes of boredom. Which must say something. And it’s not that the beautiful setting and soundtrack detract from it, on the contrary they’re one of the few things keeping me going. I just wish I didn’t have to fall back on them. For now, the verdict is still out.

And no, I won’t be doing episode summaries of episodes 4 and 5 – they were too boring and honestly nothing happened in them. Daniel Henney is nice to Eun-Young and starting to fall for her. Eun-Young is artsy and crafty and loves beautiful things(and looks beautiful while staring at beautiful things). Jae Ha is emotionally closed off and kind of a jerk, especially to Eun-Young, but is perpetually trying to decide whether he’s actually a bad guy or a good guy at heart(or so his actions impy, anyway). Lee Na is still being idiotic and chasing after Jae Ha(I’m sorry, but I have little patience for her character. Who fixates that much and for that long on someone she obviously knew in what, elementary school? Middle at most? It’s childish and immature in the extreme). The only thing of note which happened is that at the end of episode 4 Jae-Ha realizes that Eun-Young is his childhood friend, and in episode 5 he pursues her and finds out where she lives, but the two still don’t meet(see what I mean? 5 episodes! and no significant interaction between the main leads!)