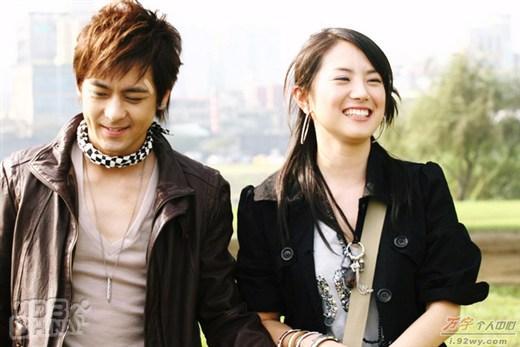 These are by no means the best Taiwanese dramas, though some of them would be, but rather some of the more accessible ones. For those unfamiliar, Taiwanese dramas are Taiwanese TV shows with an average runtime of 21 episodes, usually very romance-centered.

1)Meteor Garden– if you’ve already seen Hana Yori Dango and Boys Over Flowers, the Japanese and Korean versions of this story, you’re likely to be disappointed in this one, which is by far the lowest-budget, but Meteor Garden is the original adaptation, and it is amazing. It’s the gateway Taiwanese drama for many people, and the first drama ever for even more people.

Barbie Hsu absolutely lights up the screen as the most kick-ass girl ever(easily the best interpretation of her manga character) and she and Jerry have amazing chemistry and the script is just incredibly well-written and well, it’s just really good and has this magic about it that I can’t quite pin-down. It’s one of those classic stories that draws on some of the most basic ideas and impulses that drive us as human beings.

Shancai(Barbie Hsu) is a poor girl unhappily attending a wealthy school in which she doesn’t fit in at all. The school is led by four boys called the F4, a group of handsome, incredibly wealthy, domineering boys who hold absolute sway over all the school attendees and are headed by Daoming Si(Jerry Yan) the richest of them all. When one of Shancai’s friends is bullied by them one day, Shancai snaps and openly defies them, and immediately finds herself the target of bullying by the whole school. Daoming Si, however, fascinated by her stubborn courage, soon finds himself falling for her…Meteor Garden is a little bit of everything – part underdog story, part tragedy, part comedy, but mostly a Cinderella tale, and one of the original Asian dramas that contributed to the craze. It’s pretty much a must-see for Asian drama watchers.

2) Mars– That rare drama which is both critically and popularly acclaimed, Mars was an instant classic upon its broadcast in 2004. Re-uniting the almost-couple from Meteor Garden, Barbie Xu and Vic Zhou, it was almost destined to be popular, but no one expected it to achieve the greatness that it did. The breakthrough performance for Vic Zhou, who proved that he was far more than the pretty-boy he’d portrayed in Meteor Garden, it’s a love story between a shy, traumatized art student and a tortured, daredevil playboy. Often dark, it never pulls its punches, yet it’s got this lovely light romantic feel to it too, as well as an incredible emotional depth and psychological complexity. Vic Zhou and Barbie Hsu not only completely and seamlessly integrate with their roles but also have intense, exquisite chemistry. Embarking on a six-year-long offscreen relationship after the drama, they became the reigning couple of Taiwanese entertainment. It’s not perfectly written by any means – the middle sags a little, with too much focus on a minor character, and Mars can be quite dark – but the beginning and end, and so much in between, are amazing beyond all reason.

3)Devil Beside You– Devil Beside You, often abbreviated as DBY, is one of the most popular Taiwanese dramas ever, and was the breakout drama for current top stars Rainie Yang and Mike He . DBY starts out over-the-top and strident, but recovers its pace an episode or so into it and reveals itself as an absolutely lovely, funny, delicious romantic comedy, with chemistry-laden main leads and a gorgeous attention to relationship detail. Mike He and Rainie Yang had such delicious sparks onscreen that they instantly became one of Taiwan’s favorite onscreen couples (they would go on to star in almost equally popular Why Why Love two years later). It’s love at first fight when Qi Yue(Rainie Yang), after gathering all her courage to hand a love letter to her long-time crush, basketball captain Yuan Yi(Kingone Wang), hands it instead by accident to the school’s bad boy Jiang Meng (Mike He), better known as “the Devil”. The exchange sparks Jiang Meng’s interest and he begins pursuing her, to her horror, which becomes even greater when she realizes that he’s the son of her mother’s fiance and that they’ll be living in the same house from then on…

*The picture at the top of this post is from another Taiwanese drama entirely, My Lucky Star, but I really like that picture and couldn’t find good ones for the other three dramas so you now, sue me.

One thought on “Quick Start Guide to Taiwanese Dramas”