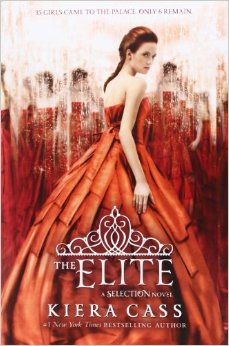 Reading the Selection series is akin to watching Pretty Little Liars: you don’t know why you’re doing it, but somehow you can’t stop. The Elite is a very silly novel that replicates all the same weaknesses and limitations of the first novel, and yet is oddly entertaining despite that, mostly because there are bits of good romance.

America Singer lives in a future America dominated by a caste system. The government is not particularly oppressive, but the caste system is fixed, with every individual being born into a caste. Eights are the bottom, and do service work that no-one else wants to do; they are poor and often hungry. Ones are at the top, the wealthy, elite, and royalty. America is born into the creative caste, Five: musicians, singers, and entertainers. When her name is randomly chosen as one of 35 potential brides for the crown prince, she is ferried off the capital and a new life of glittering ballgowns and competing for the heart of the prince.

The Elite picks up right where The Selection left off, and repeats, as stated, most of the same themes and events. The rebels appear more frequently than in the first book, but their motivations, organization, and mission remain frustratingly opaque; Cass continues to hint at broader socio-political themes without really developing them or allowing anything to significantly change about the world. In this novel, America has, mostly, fallen in love with Prince Maxon, and I can say that Maxon is much more developed, and compelling here. It’s easy to root for him, and Cass’ strength as always lies in her description of romance. The dialogue, romantic tension, and on-and-off warmth between Maxon and America draws the reader in irresistibly. Aspen is more of a supporting character here; he is much more actually present but is less present in America’s thought and heart-life, and so leaves less of an impression.

And herein is both the main strength and the weakness of Kierra Cass’ series: so much of the novels are constructed simply around America’s internal thought life. There are not enough plot events, the world is developed overly simply, and where Cass could take it to interesting political places or allow the world to really be shaken up, she inevitably holds back. Most of what plot there is revolves around various challenges the girls undertake in their Selection process, and the tensions between them. Which leaves the bulk of the novel to a teenage girl’s dithering over how far to trust the prince and which potential love interest to choose. America is surprisingly likable and relatable despite her entire world at this point revolving around men; Cass gives her a strong, sympathetic voice and captures all the insecurity, confusion, and rush of first (and second) love. But she exercises no restraint with this, so America’s worries and all-too-frequent changing of her mind over her commitment to Maxon grow wearying. Less uncertainty, more action, and please, for the love of God, give us a war or a revolution in the third or final novel.

I would recommend this to 15-year-olds: it’s quite gripping for a (very) young adult novel. I wouldn’t recommend it to anyone in their twenties. But what do I know? I seem to find it entertaining despite its near total lack of intellect – and let’s face it. A lot of us watch Pretty Little Liars. This is, after all, the 21st century.