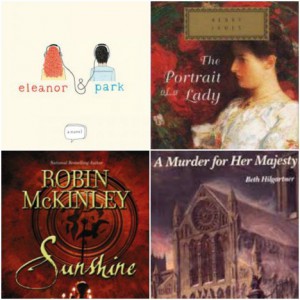 Broke and Bookish launched this book theme for the week, so I thought I’d participate. They did 10 but I’m lazy and write longer descriptions because I get carried away so you’re getting four.

1. Eleanor and Park, Rainbow Rowell. I’ve mentioned my love for Rainbow Rowell several times before, if you haven’t read her yet, she practically defines character-driven works. Eleanor and Park is a linear novel in that there are almost no characters featured at all beyond the central two; it’s a deep dive into the minds and personalities of two intelligent, outcast teens. Eleanor is a curvy loner with a unique clothing style and a troubled home life. Aloof Park is respected but left mostly alone due to being one of the only Asians at the high school. After a first, tentative connection on the bus, Eleanor stars reading along with him on the comic books he reads every day on the way to school. They forge a slow, tender, passionate connection over a shared love for music and comic books. It’s one of the best love stories I’ve ever read, and Rowell isn’t afraid to show the push and pull, tension and release, the intense obsession and curling joy and turbulence that comes with that epic first love.

2. The Portrait of a Lady, Henry James. You didn’t really think I could answer this without including the book featuring Isabel Archer, one of the most complex and also identifiable female heroines ever, right? I don’t like most of James’ other works, but this – it feels as though James is sitting behind me reading my thoughts. Isabel Archer is an American of good birth and no money until an elderly acquaintance spontaneously leaves her a huge fortune. She finds love, misfortune, and a lot of societal complications as she travels between Europe and England and finally settles down in Italy. It’s the most perceptive book I’ve ever read about how women think, in the same way that Nick Hornby captures how men think in his funny, piercingly accurate prose.

3. A Murder for Her Majesty, Beth Hilgartner. Who read this as a kid? One of the most re-readable books I’ve ever come across, this incredibly engrossing book is technically written for younger/teen readers but it so beautifully plotted and captures the atmosphere of 16th-century Tudor London so vividly, you’re immediately drawn in. Orphaned Alice Tuckfield is on the run, penniless in the rain, having left behind her country home after the sudden murder of her father. She stumbles upon a cathedral and is taken in by a group of choirboys who befriend her and allow her to join them if she masquerades as a boy. Mystery, plots, a gruff tutor who becomes a father figure, and plenty of banter and friendship light up the book. The boys all have distinct personalities and interact with Alice differently, becoming her family, brothers, and friends, and she, plucky, well-educated, and a gifted singer, leaps off the page. Most of the Goodreads reviews of this are from adults who report they couldn’t put it down, and there’s a reason why. So good.

4. Sunshine, Robin McKinley. I am not certain if this is the only adult book Robin McKinley ever wrote, but it’s certainly one of the few. Sunshine has always known there’s something a little different about herself, but since she doesn’t know what it is, she continues living her life as a baker in her small town. One day, however, she’s grabbed and wakes up chained to a wall next to a similarly shackled human-ish creature named Constantine. Things for from there. Sunshine is flawed, and funny, and snarky, and even as she very (very) reluctantly falls in love with the vampire whom she’s been thrown together with and who winds up protecting her from his own kind, she gives him all kinds of hell. This book is immutably gripping and so much better than I can describe, mostly because Sunshine is amazing.