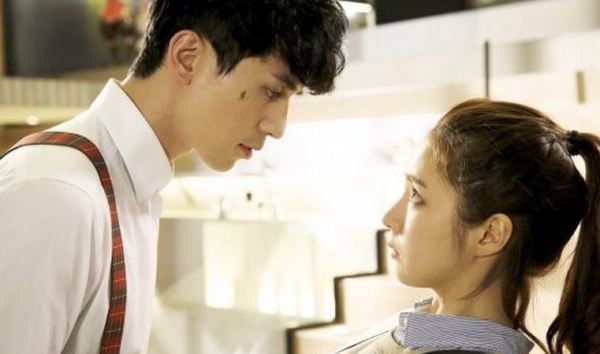 The most puzzling thing about this slightly odd drama is that it’s not based on a manwha. It seems tailor-made to have been based on one of the melodramatic, romantic manwhas that are so often the rage in Korea and Japan. And yet it’s an original creation from screenwriter Kim Kyu Wan – to which all I can say is, you got grit, to break from the tailor-made drama template most screenwriters use in this way. Kim Kyu Wan tends to write problematic dramas with a lot of potential, like Cinderella’s Sister and Robber. Iron Man centers on Joo Hong Bin (Lee Dong Wook), the oddball CEO of a hugely successful game company (video games, not board games). A chance encounter with Son Se Dong, an aspiring game designer, and the unexpected appearance of a young son he didn’t know existed, turns Hong Bin’s world upside down.

I started watching this mostly for Lee Dong Wook, and also because Dramabeans’ recap left me slightly intrigued. I skipped the first episode because I read the recap on Dramabeans and it sounded cray-cray, and I figured the story would settle down in episodes two and three. And it did. The drama makes a lot more sense by episode 3; it’s established a world, a set of stakes, and we know what’s going on (mostly).

Hong Bin is genuinely weird – most drama leads are described as either control freaks or, more rarely, quirky, but Hong Bin is oddball on a wholly different and much more convincing level. He’s perfectly capable of dealing with practical and business affairs and does so mostly with a detached ruthlessness that has probably helped his company succeed. But he’s also a really weird overgrown boy – he can play video games for 6 hours at a time, moves with the abrupt awkwardness of someone who never really grew into his body, and has very specific needs for his diet, house, and personal habits. He’s also not great on the empathy side. Dong Wook absolutely carries him, however, giving him facial tics and a physical looseness and energy that doesn’t fade or change and makes him hilarious to watch in certain scenes. When most actors play a character like this, there are moments that you feel when the ‘persona’, the crazy persona they are putting on, fades and you see just a normal human being there. It feels forced. Hong Bin is somehow a very wholistic character, you believe both his intelligence and his complete oddball nature in his personal life. It’s also the only role among Dong Wook’s past few dramas that he seems to actually be enjoying and fully committed to – he’s playing Hong Bin with just the right touch, as opposed to over-emoting as he does with many of his previous drama characters. Which fits right in with the drama’s sense of humor, which is wacky in a way I haven’t seen in a Korean drama – I paused the drama to laugh out loud several times during the first few episodes, and let’s just say that the most dramas usually get from me is a giggle. There’s something about the physical comedy and the comic timing that is just perfect and sophisticated – they know just how to hold the right beat so that the combination of Hong Bin doing something really odd with his body or facial expression and Se Dong or his hilarious bodyguard slowly reacting to it is much funnier that it would be on paper. It’s almost a British sense of comedy at times.

Also, the romance? Delicious. I mainly love this drama for two reasons: one, it turned out to be a father-son bonding drama, and I am such a sucker for that storyline, and two, the romance is highly addicting. Shin Se Kyung and Dong Wook have fantastic chemistry; it would have been easy for Se Kyung to be slightly overshadowed since Dong Wook is older, has years more acting experience, and is much taller than her physically – but she has such grit and spark, such absolutely unabashed presence, that it just works. In one particular scene, they utilize camerawork in such a way that she gets up in his face at his height and literally forces him to lean backward almost to the point of falling over – this is a girl who’s not afraid to dominate the demanding weirdo that she sees more as her adoptee’s father than as a CEO. Also, she’s immensely bright, sunny, bold, and straightforward – a character whom everyone in the drama loves and it’s easy for us as viewers to fall for her too. Generally, the sunny female lead stands up to the hero at first and then gradually succumbs to him more and more until within a few episodes she no longer earns the title “plucky”, but that’s not the case here – Se Dong continues to call Hong Bin out on things she doesn’t agree with. Meanwhile he is quickly learning to care for her more and more. It’s lovely.

The plot itself is alright but not great – it’s just a little muddled still and so many of the Kdrama tropes are still firmly in place – icy, damaged wealthy guy falls for sunny poor girl who will heal all his wounds – but I like it so far.