1. Go see The Last Five Years instead. It’s an unabashed romance starring the adorable Anna Kendrick and Jeremy Jordan who can sing. Without having seen either, 10,000 times more romantic than Fifty Shades.

2. Gaze at your wife, girlfriend, or significant other, and ponder how you have not, in fact, ever slapped her, threatened her, or tied her down in order to have sex with her.

3. Go on a freaking picnic. Find a nice hill where you can talk to your significant other as if though she’s an emancipated human being who can walk upright and has a brain and a heart.

4. Read these Fifty Shades of Grey quotes – handily put on posters of the film by The 6th Siren for your amusement and edification – for all the E.L. James you’ll ever need. 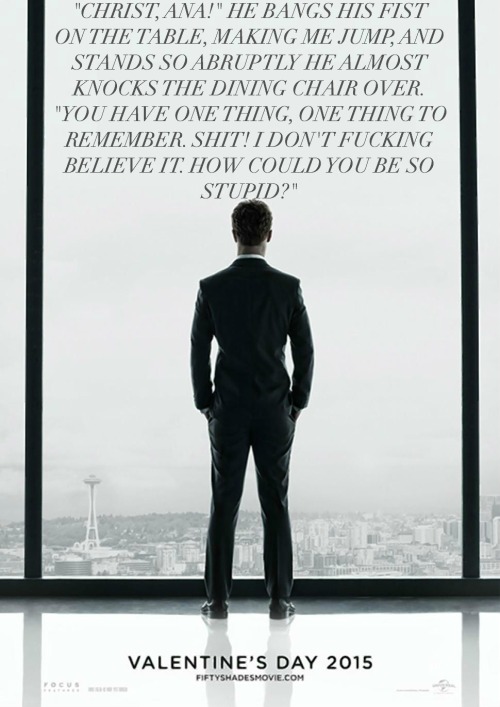 5.  Realize that the stars of Fifty Shades of Grey actually don’t like each other. “The most glaring problem with the press blitz—currently several months underway, though the film will not be released for another two weeks—is also the most damning for the upcoming film: Simply put, romantic leads Dakota Johnson and Jamie Dornan do not like each other. They dislike other things as well—the press; sex; the film in which they are starring—but it is clear their distaste for each other is the most keenly felt of all.”  The Disastrous Fifty Shades of Grey Press Tour

7.  Or this. “A college student, one of many I’ve heard from in my role as executive director of the National Center on Sexual Exploitation, wrote to me that Christian is just suffering the consequences of his own abuse, acting out in the only way he knows, and that Ana’s patient, loving behavior helps him overcome his abusive tendencies. Christian is so easily and quickly forgiven for his violent behavior. But forgiveness and devotion to an aggressor who inflicts violence is not sexy. Violence is violence. Sexual violence is worse. While this should be a black-and-white truth, E.L. James is selling it in all shades of gray.”  – The Truth about Fifty Shades of Grey

8.  Re-read Outlander, or watch the Starz series, for a tale of an alpha male who is put in a position of power over a defenseless woman and somehow manages to treat her with respect and proper boundaries anyway (egads!). Also, when two fall in love, they have all the steamy sex a good bit of the audience is probably looking for from Fifty Shades, only it’s actually shown.