“What makes a perfect record perfect?”

I remember the first time I heard a Joni Mitchell song. It was “Both Sides Now” – I came upon it directly after listening to Leonard Cohen’s “Famous Blue Raincoat” for the first time, which is as it should be, and a story of music and magical discovery all its own. What I remember about “Both Sides Now” is that it was one of the first songs to give me that sense that all great songs do: that is has always existed, that I was already aware of its existence, and that when I heard it, synapses in my brain fired to make this unknown thing instantly familiar, recognized, remembered – and loved. All of which is a long way to say: read this article – Anatomy of a Perfect Album: On Joni Mitchell’s Blue [Lithub]. “Both Sides Now” isn’t from Blue – “River” is, which is another classic, and a Christmas song, shot through with a gorgeous yet assenting wistfulness that sweeps you along its rich turns and delicate melancholy like the river of the title. Mitchell teaches us how to embrace loneliness as a friend rather than an enemy. “Only a phase, these dark café days.”

Bong Joon Ho’s Parasite placed first in the Indiewire’s critics poll for 2019, which polled 304 movie critics from around the world to pick the best movies and performances of the year. I loved Parasite, but the fact that it’s the pick for best movie of the year really speaks to the paucity of transcendent or even brilliant films this year. The movie is brilliant, but flawed, and it’s not even among Joon Ho’s two best films (of which one would certainly be the scorching, unforgettable Mother). The 50 Best Movies of 2019, According to 304 Film Critics [IndieWire] 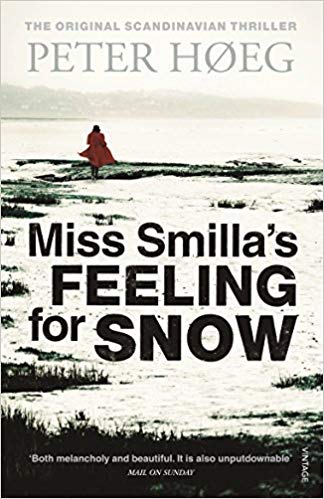 My father reads almost solely theology, but one of the few fiction books he ever recommended to me was Miss Smilla’s Feeling for Snow by Peter Høeg. As a good daughter, I ignored this for a decade. Unsurprisingly, it’s a fiercely compelling book (apparently it sold a million copies after being published in 1992). Smilla is an aging, isolated Greenlander living in Denmark (the racial tensions between Greenlanders and Danes threads through the novel) , her independence and her isolation a life that she has chosen, carved out for herself in defiance of an semi-illustrious past that slowly reveals itself. When her six year old neighbor, a boy she had befriended, is found dead in the snow from an apparent fall from a roof, Smilla immediately senses something awry, and sets out to find the truth, bending a formidable intellect and will upon it.

The novel is as mesmerizing as watching snow slowly falling, a storm approaching across a plain, but readers of insight and patience will enjoy it the most. It’s a book for serious crime fans and unfolds with precision rather than speed. Its assured voice and the way in which it unfolds the plot and acerbic, complex protagonist with by turns distance and tenderness, reminds me strikingly of the best of Jo Nesbø’s Harry Hole novels, although the first Harry Hole novel came out 5 years after Miss Smilla’s Feeling for Snow, so if anything Høeg influenced Nesbø rather than the other way around. Either way, it’s delightful and I love it.