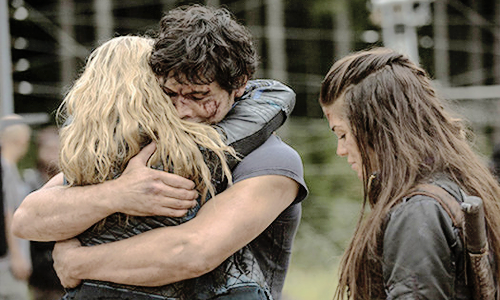 A few weeks back I wrote my first (and so far only) fanfiction. What is it that inspired intense enough passion in this girl to lead me to finally turn to fanfiction after years of writing other formats?

The CW’s The 100. Which has turned out to be so much better than it has any right to be,a dark, gritty, romantic survivalist tale of four young people who blossom into leaders, fighters, and fierce defenders of the remnants of the human race left on earth. I highly recommend it if you haven’t tried it yet (the first two episodes are okay but not great and then it hooks from there) – even critics who initially ignored it are slowly picking it up and becoming fans, including NPR Pop Culture Hour‘s Joanna Robinson. The show it reminds me of most is Lost, though it’s (obviously) not nearly as brilliant.

Clarke saw him across the clearing and something inside her seemed to come suddenly to rest. He was covered in dirt and blood but the same driving force of will, the same steadiness, that had made her trust him before against all her better judgement, still hung on him, as he stood steady as a rock, taller than anyone else, his dark, broody eyes searching the scattered crowd.

END_OF_DOCUMENT_TOKEN_TO_BE_REPLACED

When did the CW become my favorite network?