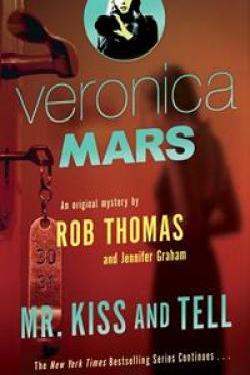 2004 cult classic TV show Veronica Mars is one of the great loves of my life (it’s one of the tags used enough to actually show up in my tag cloud to the right, for the record). So of course I pre-ordered show creator Rob Thomas and co-writer Jennifer Graham’s second book in the novel series as soon as it was available, knowing that, even if I didn’t like, it, I still wanted to support the series and the world.

In Mr. Kiss and Tell, a girl has been brutally raped and assaulted, and claims that an employee at the Neptune Grand, where she spent the evening before her assault, is the perpetrator. She plans to sue the hotel, which hires Veronica to find out the truth.

The second half of this (as was the case in the first book), is much faster-paced and tighter than the first half, but only my familiarity with and love for the characters gives life to what is unfortunately rather an underwhelming, stale world. Every single plot twist and turn, except perhaps one, is predictable – the book sets up the two or three central conflicts in the first one-third and then unrolls them in exactly the way you’d expect, without deviation. One of these subplots is the institutionalized corruption and injustice of the police force, and the series wants to be a dark, gritty take on this, a reflection of 21st-century realities, but the depth of world and character-building just isn’t there. What does that structure look like, how does corruption interact with itself, what are the internal processes and motivations of those involved? The subplot is brushed on, hinted at further development, but never really delved into.

Logan takes up a scant handful of pages sprinkled through the novel, reflective of his non-prioritized role in Veronica’s life, which is faithful to the original series but is puzzling and frustrating at this point. Rob Thomas and the writers assured fans by the events of the film that Veronica is deeply in love with Logan and committed – yet one of the same things that tore them apart in the TV series is still evident, and unlike in the series, the book doesn’t show it as a flaw: Veronica’s compulsive habit of prioritizing her cases over everything in her life.

END_OF_DOCUMENT_TOKEN_TO_BE_REPLACED

In Transit: Woman on a Train by Maja Topcagic

Lilies of the Field Motion Poem

Extraordinarily beautiful video by Marie Craven for The Poetry Storehouse, of a poem by Laura M Kaminksi

Lilies of the Field from Marie Craven on Vimeo.

Full disclosure: I only read about a third of this so this is really more my impressions than any full, impressive book review. Rhys Bowen is an award-winning mystery writer with dozens of books, and this is the 11th in her Molly Murphy series – and also my introduction to her writing.

But look – this just wasn’t very good. Molly, an Irish private detective in a world in which lady detectives are an anomaly, has just married a New York City senior detective and the two are off on their honeymoon to an acquaintance’s estate on Rhode Island. Shortly after arriving, their host turns up dead, and the two are naturally pulled into the mystery of solving his murder.

Molly (just so you know, the book is written in the first-person) is an endearing protagonist, as is her husband Daniel – both brave, fairly clever, possessed of senses of humor. But the good characterization is buried in overly long prose and a trite mystery setup. If you’re read even one or two gothic novels, much less a great many murder mysteries, you will start to check out the moment Molly arrives at an old mansion and sees the ghostly head of a mysterious child in a window – a child who was killed years before. From there, it only gets worse – a houseful of wealthy relatives any one of whom could have wanted the victim dead and who are sketched with the barest of details and personality, a suspicious housekeeper who pops out of mysterious corridors, a decanter of whisky conveniently left in a secluded spot…

END_OF_DOCUMENT_TOKEN_TO_BE_REPLACED

1. Heirs. I haven’t watched a Korean drama in a straight two years, but when I heard that my favorites Lee Min Ho, of the charisma and the bushels of talent, and Park Shin Hye, of the adorableness and expressive face, were being paired together, I knew I had to get on that. Heirs has made me fall madly for it; the romance is wistful and delicate and achingly addicting – it’s the small moments that get me, like him watching her sleep, or the two sitting on opposite sides of a winecellar wall,  both lost in thought, the wall a visual symbol of how two people can be physically close yet find each other so hard to reach. You can watch all aired episodes so far on Dramafever.

2. The Thin Man. I picked up a vintage copy of Dashiell Hammett’s famous hardboiler (yes I just coined this, why should “potboiler” exist and not “hardboiler”?) at a book sale this weekend, and a fourth of the way in am highly enjoying it. Nick and Nora Charles are a wealthy socialite couple in New York for Christmas. Nick, a former ace detective, left that life behind when he married Nora and devoted himself to running the various businesses she was left heir to by her family. The couple are blithely in love and live in a breezy flurry of cocktail parties and social events, but are left ever so slightly bored by it. So when a murder turns up practically on their doorstep Nora pushes Nick to get involved, and in between throwing back a drink every other page, he manages to do some able detecting. Some people find this book hilarious, but I find it more endearing than anything. Also, best opening line of all time surely –  “I was leaning against the bar in a speakeasy on Fifty-second Street, waiting for Nora to finish her Christmas shopping, when a girl got up from a table where she had been sitting with three other people, and came over to me.”

3. Seattle Chocolates. This stuff is delicious, y’all, particularly the Rainier cherry – I generally don’t like either cherries or pecans but somehow the blend in this chocolate bar is just perfect, rich and fruity and chocolatey and wildly addicting.