art & illustration, creativity, this & that February 14, 2015 Leave a comment 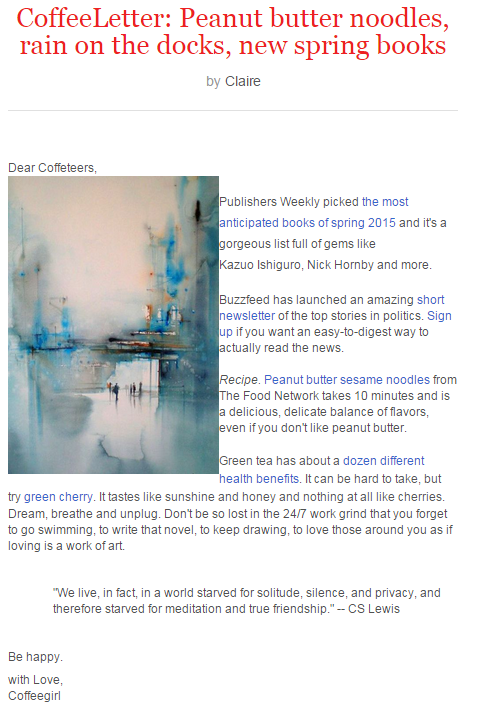 The CoffeeLetter is out! This is a once-every-two-months newsletter I send to blog followers; view this one here and subscribe to get the next one. Cheers!

“Attacks in America are far more indelible in the world’s memory than attacks in any other country. There may be fewer victims and less blood, but American tragedies somehow seem to occur in a more poignant version of reality, in a way that evokes a more sympathetic response. Within minutes American victims are lifted from the nameless to the remembered…” – The Tragedies of Others (RT Guernica)

“Knowing nothing of the Tsarnaevs’ motives, and little about Chechens, the American media tore into Wikipedia and came back with stereotypes. The Tsarnaevs were stripped of their 21st century American life and became symbols of a distant land, forever frozen in time. Journalist Eliza Shapiro proclaimed that Tamerlan Tsarnaev was “named after a brutal warlord”, despite the fact that Tamerlan, or Timur, is an ordinary first name in the Caucasus and Central Asia.”  The Wrong Kind of Caucasian (RT Al Jazeera)

“In that moment, Gordon was the ultimate hipster Renaissance woman I aspired to be, a feminist rebel who could make avant-garde art all day, then cook a killer dinner for her family at night.” Kim Gordon Sounds Off, on Sonic Youth’s Kim Gordon (RT Elle)

“True preaching must always consider lost people who are present and how to in some way invite them to turn from sin and trust in Jesus Christ. In a teaching context where the focus is on maturing believers the evangelism component is simply not equally present. This explains why formally trained preachers who have spent years on a Bible college and/or seminary campus are generally speaking less evangelistically.” What’s the Difference between Preaching and Teaching? (RT The Resurgence)

“D. had sent it to me after we broke up—four years after we’d split, more than fifteen years ago now. What I’d completely forgotten was that he’d read the book first and made notes throughout, some as simple as, “I like this” or “For Luke,” a professor we’d had a class with together at Vassar. In the poem “Still Life” he’d simply underlined the word berries.” – Notes from a Bookshop (RT The Paris Review)