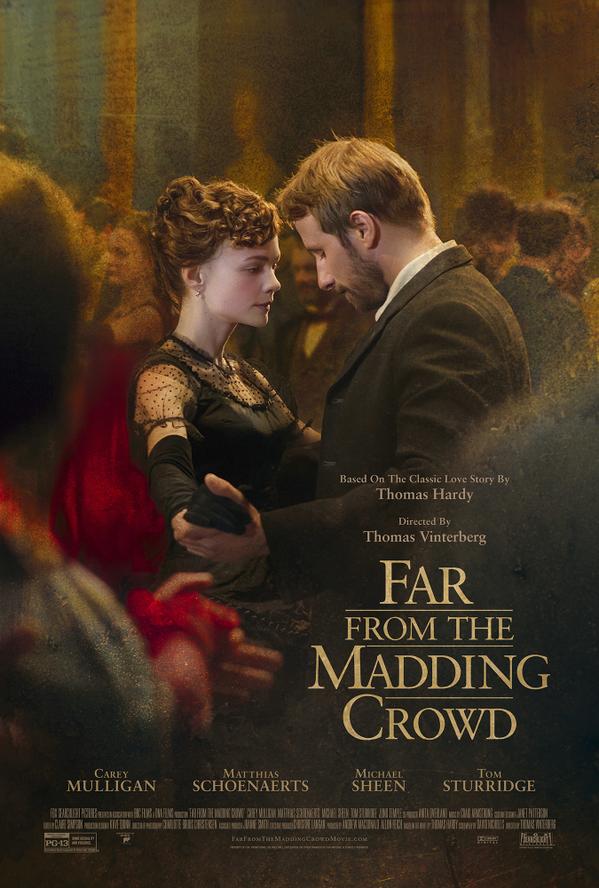 In news that had me gibbering with nerdy glee, Steven Stielberg is to direct an adaptation of Ernest Cline’s Ready Player One. Ready Player One is a hugely popular sci-fi/dystopia novel that is a blast of inventive good fun as it follows the adventures of Wade Watts, a brilliant, somewhat overweight pop culture fanatic (I mention this because I wonder if the film will be true to this or replace him with someone who looks like, I don’t know, a Hemsworth) who spends his life, along with most of humanity, inside a massive virtual reality game.

The Flash‘s Jesse Martin, Carlos Valdez, and Rick Cosnett sing a gospel, acapella version of The Serenity Ballad and it is everything you want from life. Apparently it was a big thank-you to Joss Whedon for donating a large sum to their Kickstarter project.

Oh the Books did a wonderful periodic table of Sci-Fi YA reads.

Trailer for BBC’s new epic 8-part miniseries Poldark starring Aidan Turner and based on the novels by Winston Grahm. Ross Poldark returns from the War to his beloved Cornwall to find his world in ruins.

At World’s End: The Art of Benjamin Carré 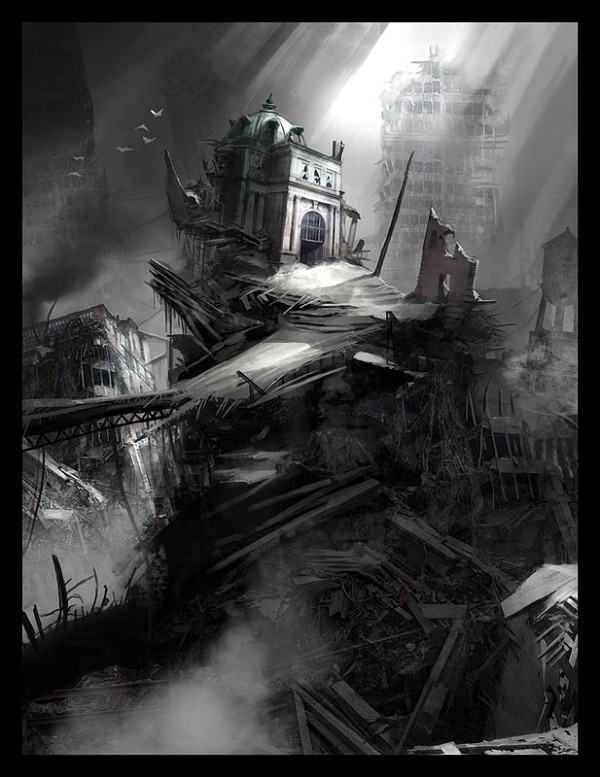 When they finally come, the others, the bright ones, they will find only rubble and ash. For where humanity once was, where earth once was, blinked out like a light in an increasing darkness; in ignorance and in fear we destroyed ourselves, until there was nothing left, only legions of space wrapped around the remnants of a fallen race.

The Steampunk Worlds of Benjamin Carré

Benjamin Carré is a French illustrator and designer who graduated from the FASE and has a double career as a cartoonist (Vampires in Carabas and Smoke City at Delcourt) and concept designer for Darkworks video games. His illustrations, broody, magnificent snapshots of sci, steampunk, and fantasy worlds, make me swoon. 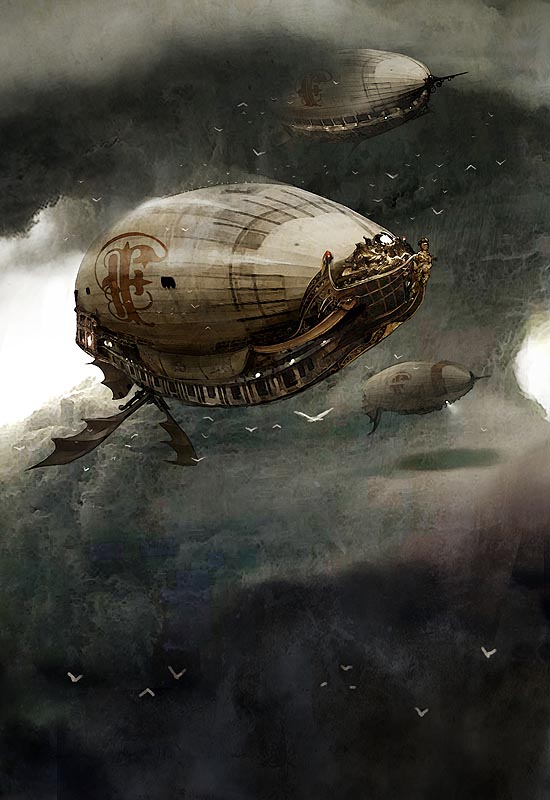 No. 6  is a 6-volume sci-fi graphic novel series written by Atsuko Asano and drawn by Hinoki Kino

The Atlantic on Cowboy Bebop

Set in 2071, Bebop imagines a dystopian future where earth has been irrevocably damaged due to the creation of a “stargate,” forcing humans to evacuate the planet and create colonies across the solar system. The result is a galaxy of lawlessness, where crime lords rule and cops pay bounty hunters (often referred to as cowboys) to handle some of the grunt work. People drink in dive bars. Income inequality is terrible. Everyone speaks like they’re background extras in Chinatown. The show ultimately features so many cross-ranging influences and nods to other famous works it’s almost impossible to keep track. It’s Sergio Leone in a spacesuit. It’s Butch Cassidy and the Sundance Kid with automatic weapons.”

read more at The Atlantic

I’m a little late posting these, but I wanted to do a screencapture post of the premiere episode of season 8, because it did have some lovely visuals. The above shot especially is a favorite, as it looks like something out of Firefly or every other space story, and sometimes I lose the sheer wonder of the TARDIS being not just a time-traveling machine but also a spaceship.

Also, favorite line from the episode?

I liked the episode, but thought it was underwhelming, and agree with Christopher Campbell’s review at Film School Rejects. Capaldi’s faces, though, are aces.

END_OF_DOCUMENT_TOKEN_TO_BE_REPLACED

This isn’t a guide so much as a few quick tips to enjoying your first trip to NYC.

New York City is composed of five boroughs: Manhattan, The Bronx, Brooklyn, Queens and Staten Island. As a newbie traveler, I would have attempted to hit up at least three of them on my first trip to New York. As a more seasoned traveler, I recommend picking one, sticking with it, and really exploring – you’ll be less rushed, enjoy and experience more, and be able to really soak up the vibe of whichever one you choose. Below is an overview map.

END_OF_DOCUMENT_TOKEN_TO_BE_REPLACED

So much goodness on Pajiba today summarizing 2015 films –

Avengers: Age of Ultron — The sequel to the third highest grossing film of all time, built inside one of the most successful cinematic universes of all time is obviously a slam dunk. The fact that James Spader — one of the most wry, deadpan actors in Hollywood — is playing the villain, and will voice Whedon’s ultra-wry dialogue only makes it that much more compelling. The addition of Elisabeth Olson (as the Scarlet Witch) and Aaron Taylor-Johnson (as Quicksilver) doesn’t hurt, nor does our expectation that Whedon will likely kill off a character. For maximum devastation, it should be Tony Stark, but I suspect cooler heads (and Marvel’s money bags) will prevail, meaning it’ll be someone like Pepper Potts. Bah!

Star Wars VII — Here’s what we know about Star Wars VII: It will be a continuation of the series that will pick up 20 to 40 years after Return of the Jedi. J.J. Abrams will direct. Simon Kinberg and Lawrence Kasdan are tasked with screenplay duties. Carrie Fisher, Harrison Ford and Mark Hamill will almost certainly return. Chewbacca is probably in it. Saoirse Ronan has auditioned for a role, but according to her, “so has everyone.” John Williams will compose the score. It will be filmed in the UK.

That’s essentially all we know, and the less we know, the more we will anticipate the return of the most successful sci-fi series of all time under the leadership of a director who is bound to improve upon George Lucas’ last trilogy. RT

Film School Rejects covers the new Star Wars writers more in depth – “Kasdan, by contrast, has moved from mere consultant to lead writer, and that should instill great confidence in anyone interested in a return to form for the Star Wars universe. Sure he co-wrote Dreamcatcher, but in addition to it being a fairly shitty source novel do you know who the other co-writer on the screenplay is? William Fucking Goldman. That’s right. The man behind The Princess Bride, Misery, All the President’s Men, Butch Cassidy & the Sundance Kid, Marathon Man, and more co-wrote the script for Dreamcatcher.” RT

Brilliant article from Daniel Carlson on modern TV-watching. “I fight every day my desire to have everything be awesome and interesting and delivered on time and flawless and surprising and perfect. (I’m a Willenial.) Everything is go go go, now now now, this must be great and witty and dark or dark-lite or winking and self-reflexive and ready to be chopped into gifs. It has to be totes the best, or I just can’t even. It has to make you feel feels. It has to make you do all sorts of things that look like emotion but are in fact disguised methods of dissection. And God help me, sometimes I fall for it.” RT

And finally, quite a decent introduction to the history and style of Bollywood films from my friends over at LAAF. RT